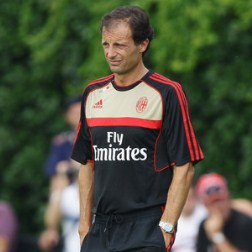 It has been revealed that AC Milan are set to hand coach Massimiliano Allegri an improved contract.

After winning the Scudetto at his first attempt, Allegri is set to be rewarded by Milan with a new deal through to 2014.

Allegri turns 44 today and declared: “I believe in this AC Milan, we can win the league and reach the Champions League final.

“We’ve started a cycle. Inter is still the most dangerous rival in the championship but we are the favorites for the Scudetto.”

“I’ve never seen Ibra so serene and relaxed, this season he will handle things differently.”

Max Allegri Surprised With The Signing Of Robinho