Reports are out claiming that Juventus boss Massimiliano Allegri is confident keeping hold of Arturo Vidal. 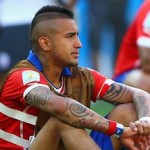 The Chile international said he wants to talk to the new Coach before making a decision on his future, with Manchester United keen.

“I am not worried,” said Allegri.

“He is a Juventus player and I am relaxed. I’ve already spoken to him, as I have done with all the players who are currently all over the world.” Man Utd Wants To Sign The Best Players In The World! – Moyes