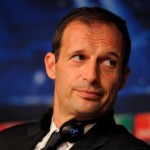 Massimiliano Allegri has declared that Juventus are capable of beating Barcelona in the Champions League final.

The Italian giants will go into the Berlin clash as underdogs.

“First things first, we have to prepare for the game tomorrow,” Allegri said.

“I don’t know when the party will be. These are details, the club will let you know when there will be a party.

“Then we have a week where we can get a few days of rest, where we have to prepare for this Champions League final without getting too worked up, so we don’t arrive there with anxiety.

“It’s a final, we’ll play it knowing that we’re facing a very strong team, but also knowing that we have a very good chance of taking home this Champions League.

“It won’t be easy, but I don’t think a Champions League final is ever easy.

“But we mustn’t play it with stress, so we must remember the final is on June 6. We can’t play it before then, and we can’t move it.”