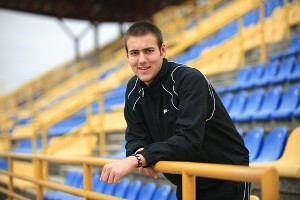 Croatian goalkeeper Matej Delac is excited about his summer move to Chelsea.

Delac will join the Blues from Inter Zapresic, and he will arrive at Stamford Bridge when he turns 18 in August.

The 6ft 3in goalkeeper told reporters that : “It’s every player’s dream to sign for such a big club and to play in the strongest league in the world, and I will be achieving that already at my age,”

He also added that : “You watch those players on TV and the next thing you know you are with them on the pitch. It’s a really huge thing to practice with such big stars,”

“I was mostly talking with the goalkeepers. Petr Cech complimented me on a few occasions. It was huge stuff for me. I tried to learn from him and I was copying his moves. Now I am following his regime and I hope I will be as good as him one day.”