It has been reported that Mateo Kovacic is not getting carried away by rumours linking him with Manchester United and Arsenal. 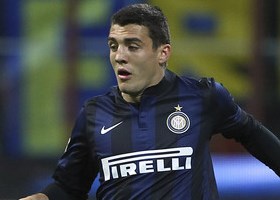 The Austrian-born Croatian midfielder has been with Inter Milan since January 2013 but is already the subject of speculation regarding a possible summer transfer to England.

However, the 19-year old is aware that some transfer news is not quite accurate as he continues to further his development in Italy with the Nerazzurri.

“The press have to write something. I may be young but I have learned so far that journalists must speculate on something every day,” he told Sportske Novosti.

“But all that is not a burden for me. I have a contract until 2017 and my future is with Inter. I’m really happy that I’m part of such a great club.

“So all I’m thinking right now is how to become better player, how to help my team to get much better results.

“I’m young, so I have a lot of time. And I’m still adapting…

“But I’m happy and also everybody at Inter are happy with me. And that counts the most to me.”

Since arriving at the San Siro from Dinamo Zagreb, Kovacic has made a total of 38 appearances for Inter, including 40 in Serie A.