It has been reported that Mathieu Debuchy is delighted with his move to Arsenal. 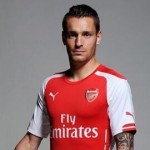 The former Newcastle United fullback, who has reportedly cost the Gunners around £12million, becomes Arsenal’s second signing of the summer, following the arrival of Alexis Sanchez from Barcelona.

The 28 year old is in no doubt he has joined a club very much on the up.

Debuchy said in an interview with Arsenal Player : “I know that Arsenal can win titles every year. Winning the FA Cup last season was something magnificent, but I hope that it is just the beginning and that there will be more to come next season,”.

“There are some really great players in this team. We saw that last season and I think it will be even better this season.

“I hope there is more silverware to come in the next few years.”

Debuchy is confident he can continue his progress, having been a consistent performer at Newcastle following a £5million move from Lille in January 2013.

“The settling-in period will be easier. I have been playing in the Premier League for a year-and-a-half now, so I already know it well, so that will be in my favour.”