Reports are out claiming that Arsenal right-back Mathieu Debuchy is keen to use pre-season as a way of returning to the Arsenal line-up, after injury ruled him out for much of last season. 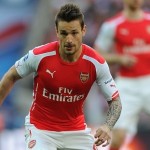 Debuchy, who signed for the Gunners from Newcastle United last summer, immediately came into the team as a starter but missed plenty of action after sustaining an ankle ligament injury in September.

Upon his return, the Frenchman dislocated his shoulder which meant another long spell in the Arsenal medical room.

However, speaking with Arsenal Player, the 29-year-old stressed how much he was looking forward to being part of the Gunners plans in the pre-season ahead of the upcoming campaign.

Debuchy said: “I’m so excited to go to Singapore and work hard with the team. I’ve never been before, it’s my first time.”

“I need to have a good pre-season. It was a hard year last year and I need to do some hard training to be fit for the first game.”

Dubuchy will need to return to his previous levels if he is to displace Hector Bellerin, who enjoyed some brilliant form when drafted into the team to replace his more senior colleague.