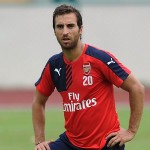 Reports are out claiming that Mathieu Flamini is confident Arsene Wenger has a plan to overcome Arsenal’s lengthy injury list.

Midfielders Francis Coquelin and Mikel Arteta went down during the weekend’s 2-1 loss at West Bromwich Albion, adding to more key players to the ever-growing medical list, but Flamini knows the Frenchman will control the situation with calmness and poise.

“It has been like that for him for so many years, he has always been under control and he always knows what he’s doing,” Flamini told Sky Sports News HQ.

“He believes in us, and we believe in him. So we are very proud to have him as our coach.

“Hopefully that shows how much he believes in his team, and that’s obviously very important for the players, and I believe every single one of us wants to pay that back on the field each game.” Wojciech Szczesny : Arsenal Can Beat Anyone In The Country And In Europe!