It has been reported that Arsenal midfielder Mathieu Flamini hailed two-goal Alexis Sanchez after victory at Sunderland. 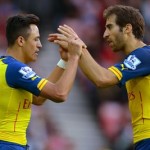 The French defensive midfielder is impressed at how well Alexis has settled in the Premier League.

“I’m very pleased to play with such a good player,” the midfielder told arsenal.com. “He’s giving a lot for the team, working very hard and also he’s making the difference.

“He’s a top player but what I also want to say is well done to him [and the team] for working so hard. That’s very important and is making a difference.

“He’s played very well until now. We knew he was a top player and he’s proving it in every game.

“I think he’s giving a lot for the team – not only because he’s making the difference offensively, but he’s also working hard for the team.

“The spirit is great. Everyone is working for each other and that makes a difference, especially in a difficult game like [on Saturday].”