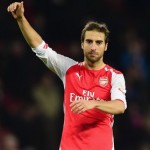 Mathieu Flamini has admitted that he is absolutely delighted about the development of Francis Coquelin.

The French midfielder has emerged as one of Arsenal’s key players since returning from a loan spell with Charlton Athletic in December, keeping his more experienced countryman Flamini out of the starting line-up.

Flamini, 31, is aware just how well Coquelin has performed in 2015 but that has not stopped the former AC Milan star from dreaming about a start in this Saturday’s FA Cup final against Aston Villa at Wembley.

“It’s part of the game when you’re playing in top teams,” he told reporters.

“You have to fight to find your place, but it’s part of the game.

“We all knew Francis was a great player and we’re really pleased for him because he had the chance to prove it. He has been doing very well since coming into the team so I’m not surprised.”

Flamini added: “The situation I accept. Competition makes you better. There’s not much to say when the team is winning every single game.

“You just have to accept it. I’m looking forward. I’m happy to be part of this club.

“I’m looking forward to win another trophy, that’s the most important. I don’t think the personal situation of every player is important, especially when we’re about to play another final and add another trophy.”