Mathieu Flamini has declared that Arsenal must not dwell on their Capital One Cup defeat at Sheffield Wednesday. 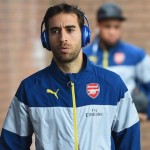 The French midfielder made his third start of the season in south Yorkshire and says the Gunners need to make amends when they face Swansea in the Premier League on Saturday.

“It is one of the positive things, you can say, playing every three days, that we can make sure we rectify the direction,” he told Arsenal Player.

“We have another game in three days so we can make sure we win it, forget about this one and move forward in the Premier League.

“I think they played a good game. We started the game with two injuries in [the first 20] minutes which made it even worse.

“Today we faced a good team. There is not much to say. Bad result, bad day. Now we have to rest and focus on the Premier League.”