Reports have emerged claiming that Bayern Munich star Mats Hummels has revealed how close he was to becoming a Manchester United player. 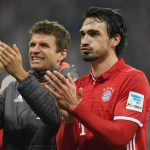 The German international centre-half was a target for the Red Devils when David Moyes was in charge in 2013 and again the following year when Louis van Gaal was at the helm at Old Trafford.

Hummels, 27, was also wanted by Real Madrid, Barcelona and Atletico Madrid but eventually left Borussia Dortmund to return to boyhood club Bayern Munich this past summer.

Asked in an interview with the Daily Mail if he was close to signing with United, Hummels said: “Yes. Yes, yes, yes. It was close. Very close.

“There were talks, several times in the last few years. They were the offers. I had England or one of the three big Spanish clubs.

“The Spanish interest was loose, loose offers. I don’t like it that way. Nothing got close like the one from England.

“Van Gaal wanted me but he wasn’t the only one. It is getting difficult for me now to play in England. I’m 28 next month and I’ve signed here for five years.”