It has been reported that Borussia Dortmund defender Mats Hummels is preparing to join Manchester United. 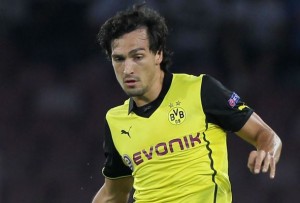 The Daily Star claims that the 25-year-old defender has been a long-term target for United and Louis Van Gaal is determined to bring him to Old Trafford.

Hummels will line up against Bayern Munich in the German Cup final at the weekend.

But that could be the Germany star’s last game in a Dortmund shirt if United agree a switch.