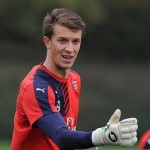 Reports are out claiming that Arsenal keeper Matt Macey has signed a contract extension to keep him at the club until 2018.

The 21-year-old moved to the Emirates from Bristol Rovers in 2013, and has been an unused substitute on 15 occasions this season.