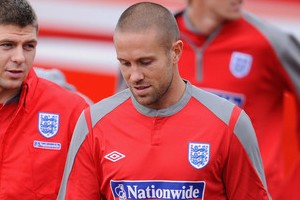 Matthew Upson is considering a three-year contract extension offered to him by West Ham United.

The 31-year old has previously been linked with a potential move away from Upton Park with clubs such as Tottenham, Manchester City and Liverpool all believed to be interested but he has said he enjoys being a Hammers player and would like to remain at the club.

The Endland international defender said : “I would rather play for a club that is demanding and has the harsh realities that come with playing here,”.

“I enjoy it here because you have to give everything each time you play.

“There has been a lot of pressure. Aside from the relegation battle, there is the general pressure of playing at West Ham United and what is expected from us every time we run out on that pitch. I have always said I enjoy that.

“The campaign turned into a battle and it is good to come out on top from that. I would be nice not to experience that again and I am sure the club can build on this.”