It has been reported that after defeat to Manchester United, Tottenham boss Mauricio Pochettino admits he needs a new striker. 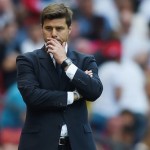 Once Christian Eriksen had squandered a good early chance, Spurs never looked like scoring and, unfortunately for the Londoners, they went behind when Walker poked the ball past Michel Vorm in the first half just as Wayne Rooney was about to shoot.

“Today we were unlucky. It was very frustrating and disappointing in the dressing room,” Pochettino said.

“In the first 20 minutes we dominated the game and created a chance.

“After that mistake we conceded a goal.

“I think we created more chances and deserved more than to lose 1-0.

“I think we played well and a high level. But it’s true that when you make a mistake when you have the player in front of you like Rooney, like Depay, like (Ashley) Young then will get a chance and score.”