It has been reported that Tottenham boss Mauricio Pochettino hopes to see Roberto Soldado go on a scoring run after breaking his duck in victory over Everton. 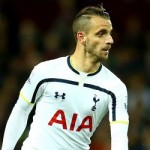 The £26m Tottenham flop scored his first goal in the Premier League for eight months to help Spurs climb to seventh, level on points with Arsenal.

Pochettino said: “The striker who doesn’t score is frustrated. Today he scored and he’s more happy and more free.

“He felt the pressure. You need to give confidence to the player to work hard. It was not easy. It’s important for the team if our strikers start to score goals.”