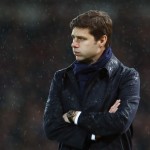 Reports are out claiming that Mauricio Pochettino says he plans to soon sign a new contract with Tottenham.

Pochettino’s success has inevitably led to speculation that other clubs may try to recruit him, with some reports claiming Manchester United would view him as a good fit to replace Louis van Gaal.

But he is now poised to extend his contract with Tottenham and said on Friday: “It was an easy decision when you feel the love of the people and the potential of the club is massive, so why change?

“We create a good atmosphere on the training ground and I think we can achieve big things in the future. I believe in this project and this club. I want to stay here.”