Reports are out claiming that Mauricio Pochettino wants his Tottenham side to improve their productivity in front of goal. 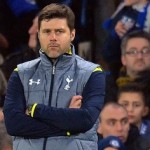 Spurs were easily beaten 3-0 by Chelsea at Stamford Bridge on Wednesday night which led Pochettino to believe that his players in attack have to be better when presented goalscoring opportunities.

“We tried to score. We tried to create chances but in the second half we were hit by another counter-attack,” he told Sky Sports.

“I think we deserved to score but it’s 3-0. It’s a difficult result but this is football and we played against a very tough team.

“It’s disappointing because I think we started the game very well but the first chance they had they scored.

“After we made another mistake and conceded to go 2-0 down, Chelsea are a side in a comfortable situation and when the score is positive for them they play on the counter attack.”

The loss was Tottenham’s first in their past three outings which saw them drop to 10th on the Premier League table while league leaders Chelsea remained six points clear of second-placed Manchester City. Jose Mourinho Confident Of Bringing The Best Out Of Fernando Torres Arsenal, Tottenham To Do Battle For Schalke’s Roman Neustadter