Reports have emerged claiming that Mauro Icardi is set to stay with Inter Milan. 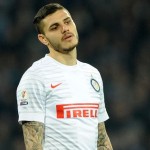 Tuttomercatoweb claims the 22-year old Argentine striker is set to put pen to a lucrative new deal with the Nerazzurri which is expected to be officially announced this week.

Former Sampdoria young gun Icardi had been attracting the attention of Premier League trio Arsenal, Chelsea and Manchester United but it is believed he will commit to Inter for who he has scored 27 goals in 54 appearances in all competitions since his arrival at the San Siro in the summer of 2013.