It has been reported that Arsenal target Maxime Gonalons is staying at Lyon. 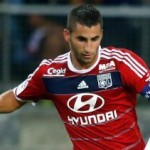 It is said that the 25-year-old club captain has decided that his future remains with Les Gones.

New boss Hubert Fournier told the club’s official website: “I am a very happy coach. We have a sporting project and it’s very important to have players like Maxime, that represent the spirit of the club.

“It’s a big decision and a strong one for him. It’s not a small little club that was knocking on his door! I chatted with him a few weeks ago. He told me then that he wanted to stay at the club.

“This decision is an honour to him. He has been one of the leaders of the club for a long time. I can feel he is very attached to OL. He is OL’s captain and that says it all.” Ramsey Convinced Arsenal ‘More Than Capable’ Of Scoring At Monaco