It has been reported that Manchester United Academy coach Paul McGuinness believes that youngster Axel Tuanzebe’s recent call up to the first team proves that manager Louis van Gaal is following the club’s tradition of youth development. 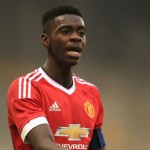 The Dutchman has recently promoted Jesse Lingard to the starting eleven and also handed another academy graduate Cameron Borthwick-Jackson his debut earlier this month.

McGuinness told MUTV: “This (Tuanzebe scenario) is where Louis van Gaal, to be honest with you, is following completely in the footsteps of previous United managers’ tradition for it.

“When I was a young player, I was taken to two or three games when you had a first reserve, there were only 11 players and one sub, so you’d go in as reserve and carry the kit and do other things. It all gives you experience of being with the first team and that’s going on regularly now.

“The first team does not have a massive squad so this week, the international week, the Under-18s, Under-19s and Under-21s are all training with the first-team players which is great for their development.”