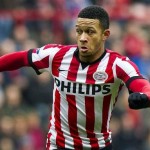 It has been revealed that Memphis Depay has set himself a goalscoring target with Manchester United next season.

Depay was the Eredevisie’s top scorer with 22 goals as PSV clinched the Dutch title.

He said: “If you ask me to make an estimate, I think maybe 15 of those 22 goals this season in England I can score.

“In recent months I looked occasionally how many goals wingers score in different leagues.