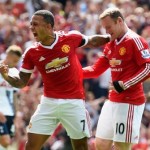 It has been reported that Manchester United boss Louis van Gaal felt Memphis Depay was “too anxious” for his debut against Tottenham.

The Dutch international struggled to make an impact during the 1-0 win.

Van Gaal said : “I told Memphis [Depay] that he doesn’t have to play with too much eagerness and passion and that applies to the whole team.”