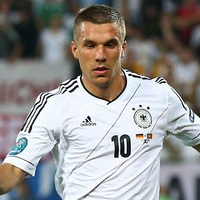 The former FC Cologne man played an important role in Germany’s 2-1 win over Holland at Euro2012 on Wednesday, helping keep Arjen Robben quiet, and although Mertescker felt it was a good performance, he expects the 27-year old to more of an attacking force in North London.

“Defensively it was a great game from Lukas,” Mertesacker told Arsenal’s official website.

“He had to cover for Philippe Lahm, with Arjen Robben on his flank, and he did it very well. Especially in the first half, he covered him all the time and it was two against one on Robben.

“I think that was more important than his attacking qualities today. But every Arsenal fan will soon see what he can do offensively.”

Will Fabianski Ever Play For Arsenal Again? – Video Santi Cazorla Proud Of Personal Form With Arsenal This Season