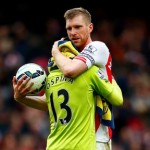 Reports are out claiming that Arsenal defender Per Mertesacker is delighted at how the Gunners have responded following a difficult start to the season.

Owing to the exertions of the summer World Cup, Arsenal made a very slow start to the Premier League campaign and it looked like the Gunners would be in grave danger of missing out on a top four finish.

Much to the delight of the supporters though, Arsenal have embarked on a wonderful run of 15 victories in 17 matches during the last few months and the North London outfit look certainties to produce at least a top-three finish.

Defender Mertesacker, who won the 2014 World Cup with Germany, has been a key component to Arsenal’s fantastic revival and the defender has gone on to express his delight at his side’s turnaround.

Speaking to Arsenal’s official website, Mertesacker said: “I am delighted with how the team responded to the criticism that came our way because it is a completely new experience for a lot of players to have post-World Cup difficulties.

“But the belief and trust of the manager and the inner core of the club has been absolutely amazing. This means more to me than what happened in the first few months with the lack of form and the criticism.

“We are in a good position now [but at the start] we suffered a lot of injuries to players who were amazing last season, so we had to replace them with youngsters.

“But there was always good energy because they proved they can deliver good performances for the team and that raised everyone’s level. I am delighted with the team’s performances throughout the year.”