Reports are out claiming that Per Mertesacker says that the Arsenal defence also deserves a lot of credit following the 3-0 win over Manchester United. 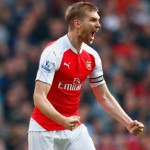 Arsenal claimed a fine victory over rivals United at the Emirates Stadium on Sunday and the stars for the Gunners were attacking duo Alexis Sanchez and Mesut Ozil.

However, the German international believes that the Arsenal backline also had a huge part in the victory over United and added that the defenders should get their due credit.

Mertesacker told reporters: “It’s very important that they find each other in the final third. You could see the little pass from Theo Walcott to Mesut Ozil, how important that was, just a tiny little ball, and on the break we are very dangerous, and even more so with the two players you mentioned.

“Defensively it was a tough fight, especially in the second half when Fellaini came on. He is always very physical but we did quite well. We gave them two or three chances, but we have a great goalkeeper as well and he did well also, so defensively I think we can build on that. Now we have a little break and in two weeks we come together again and we have to remind ourselves what we can do.”