Reports are out claiming that Arsenal defender Per Mertesacker believes that the Gunners will need to be more decisive in front of the goal when they face Barcelona in the Champions League on Tuesday night. 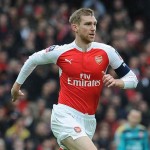 The North London club have been struggling with their finishing of late and were once again wasteful in the goalless FA Cup draw against Hull City on Saturday.

The German international is aware of Arsenal’s recent shortcomings in the final third and has urged the attackers to get it right when Barca come to town.

“Overall, we missed a bit of something and we have to come back quickly in three days time,” he said.

“We have a very important game, the first leg against Barcelona, and we will see the fans again, it will be another buzzing night but it is up to us how we perform.

“It is down to us, we produced a good defensive performance but overall in the final third, that little final pass at the end, we always rushed ourselves at times to finish so we need to learn from that.

“We had a couple of good chances and we couldn’t keep the pressure as high as we wanted, especially in the second half.

“We had enough chances to win, but we were unlucky at times.

“Overall it was disappointing, especially our finishing. We allowed (Eldin Jakupovic) to make some decent saves because we were not that decisive.”