It has been reported that Arsenal defender Per Mertesacker believes the club needs to move on quickly from their Champions League disappointment. 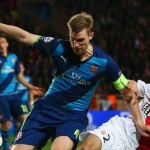 The Gunners defeated Monaco 2-0 in the Round of 16 second leg at the Stade Louis II but were knocked out on away goals after a 3-3 aggregate following the 3-1 first leg loss.

Now, according to Mertesacker, the north London outfit have to quickly get over the elimination and concentrate on winning the FA Cup for a second year in a row as well as fighting for the Premier League title as they sit seven points behind leaders Chelsea.

“Today was a completely different day and we could have scored more but it’s a game and if we continue to play like that I think then we have a great chance in the FA Cup and the league,” he told ITV1 in Monaco.

“When you have one bad game in the Champions League that’s the beauty of the game, you’re out, even against a team that was underestimated.”