Messi and dad officially charged with tax fraud, to appear in court in September 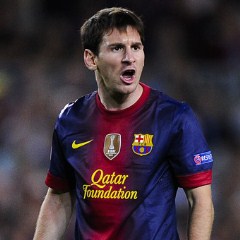 Lionel Messi and his father Jorge were ordered on Thursday to appear before a Barcelona court in September after Spanish prosecutors accused the pair of tax fraud.

Earlier in the day, Spanish media reported that an examining magistrate had brought official charges against the Messis but a writ showed the two had been summoned to give evidence.
The magistrate has accepted a complaint from the Catalonia tax crime prosecutor, who has accused Barcelona’s World Player of the Year and his father of defrauding the Spanish tax office of more than 4 million euros (£3.4m).

“The judge has accepted the complaint presented by the prosecutor against Lionel Messi and Jorge Horacio Messi for three alleged crimes against the tax authorities,” a statement from the Barcelona court said.
“The acceptance of the case is the next step after a complaint is presented. The court can start to investigate and reach a conclusion as to whether a crime has been committed or not.

“The magistrate has called the accused to give evidence on September 17.”

In the Spanish legal system, if the magistrate determines there is sufficient evidence to bring charges, he or she will do so and then proceed with a pre-trial investigation.
The complaint relates to the three tax periods of 2007, 2008 and 2009, the court said.
Two weeks ago, the prosecutor’s office said income from the sale of Messi’s image rights was effectively hidden from Spanish authorities via a complex web of shell companies in Uruguay, Belize, Switzerland and the United Kingdom.
The pair could face up to four years in jail if found guilty, according to Spanish law.
“We learned about the action begun by the Spanish prosecutor through the media,” Rosario-born Messi, who has been resident in Barcelona since 2000 and gained Spanish citizenship in 2005, wrote in a statement on his official Facebook page at the time.
“It is something that surprises us because we have never committed any offence.”


I am discussing a new contract with Arsenal – Sagna