Chelsea signing Cesc Fabregas has revealed that it was his decision to leave Barcelona. 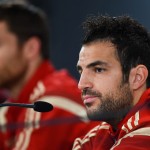 “No, it was not their decision, they said they’d miss me.

“The president tried to block my way, but I was very clear,” explained Cesc to Radio Cope.

“At the time I spoke with (sporting director) Andoni Zubizarreta and president (Josep Bartomeu), and I told them I wanted to go. And the truth is that everything was very easy. I’m not going for anything specific, but a cluster of things.

“If I thought I was not going to be happy at Chelsea, I would not have taken this major life decision.

“Personally I do not doubt that I’ll be happy because I’ve lived in London for eight years, I have friends, I’ll be with my family and I’m an hour and a half from Barcelona.”

On reports that Barca asked Lionel Messi to convince him to stay, Cesc added: “It is not true they (the club) sent Messi. Leo did not ask me to stay. If you knew us, you would know that he asks for nothing.

“Leo is terrific and told me to be happy wherever I went.”