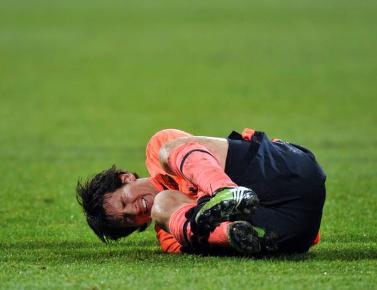 Messi injured his ankle in the Catalans’ 2-1 Champions League win at Dynamo Kiev on Wednesday.

Messi, whose superb freekick sealed Barcelona’s victory, suffered a hefty challenge from Leandro Almeida late in the match which damaged his right ankle.

After the match against Espanyol, Barcelona will travel to the United Arab Emirates for the FIFA Club World Cup, where they will play to become the world’s top club side.

The importance of Messi to Barcelona’s cause was underlined on Monday when he picked up his Ballon d’Or trophy, awarded to European footballer of the year.

The Spanish and European champions topped Champions League Group F thanks to the win in Kiev and head the La Liga standings with 36 points from 14 matches, five ahead of Real Madrid in second who have played one game fewer.