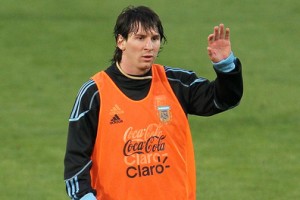 Messi admits that England winning the World Cup in South Africa would put Rooney in pole position to lift the coveted trophy in December.

He told reporters that :”It could be that whoever of us two wins the competition will become the World Player of the Year.

“In a tournament of this magnitude any player can gain a lot of points. I think of Fabio Cannavaro who won the World Cup with Italy and then won every individual award.

“So I think if one of us wins the World Cup, he will have an even bigger chance.”