It has been reported that Mesut Ozil has welcomed Alexis Sanchez’s impact at Arsenal. 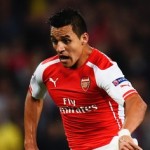 The German international midfielder is looking to kick on in his second campaign in England and believes the Chilean forward has given the whole club a lift.

“Not just me, but I think the whole team are happy because we’ve added a world class player,” Ozil told Arsenal Player.

“He played at Barcelona and scored lots of goals so you know he has quality and we’re pleased to have him.

“I’m sure we’ll see lots of goals from him this season.”