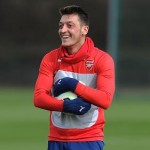 Reports are out claiming that Arsenal midfielder Mesut Ozil insists they’re capable of beating AS Monaco in the second-leg of their Champions League tie.

Arsenal need to overturn a 3-1 deficit to progress to the quarterfinals.

“When you believe in yourselves, a positive energy grows that you can achieve your aims. In football, things that may look unlikely can happen. I know that if we believe in ourselves and utilise our potential, we can still go through,” Ozil told Arsenal Player.

“We need to score three goals and Monaco are a team that play defensively, but we have to take initiative and score the first goal as quickly as possible to boost our confidence.

“It is going to be difficult to score three times because they have defended well in the tournament so far, but if you look at our past matches and the way we played against Manchester United (in the FA Cup quarter-final) last week, I think there’s a chance we can still progress.

“When you look at the Manchester United game, we controlled it and deserved to win the game, that just shows that if we convert what the manager encourages us to do into the games, we can achieve a lot.”