Mesut Ozil has declared that Arsenal are still capable of winning multiple trophies this season. 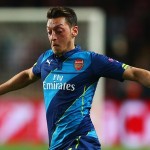 The Gunners find themselves third on the Premier League table just seven points behind leaders Chelsea thanks to a six-game winning run.

?There is renewed hope in north London that Arsenal can haul in their rivals by season’s end which could add to a possible second-straight FA Cup as they get set for the semi-final with Reading next month.

“We’re rightfully near the top of the table and in the semi-finals of the FA Cup again. I think we can win trophies again this year, and if we do that, we will be satisfied.”?