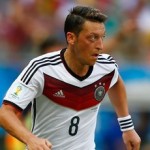 It has been reported that Arsenal midfielder Mesut Ozil won’t have a bad word said against former Real Madrid teammate Cristiano Ronaldo.

However the German international insisted: “Cristiano has given everything for Real Madrid. From sharing many workouts with him, I can say that he is a true genius,