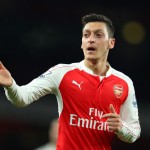 Reports have emerged claiming that Mesut Ozil has denied media reports suggesting a departure from Arsenal.

Reports from Spanish publication Don Balon on Tuesday morning claimed that the 27-year-old was considering his future at Arsenal as a season of unfulfilled promise comes to an end.

Arsenal’s struggles in the Premier League and Champions League had apparently prompted the playmaker to consider his future but Ozil has moved to discredit the reports.

“I have seen the media reports today,” Ozil wrote on Twitter. “Arsène Wenger was a big reason for me joining Arsenal – this hasn’t changed!”