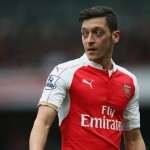 Reports are out claiming that Arsenal boss Arsene Wenger says Mesut Ozil deserves to be Player of the Year.

The 27-year-old German playmaker has 18 Premier League assists to his name this season – seven more than nearest rivals Riyad Mahrez and David Silva – and scored six goals to help his side to third in the table.

Wenger praised Ozil during a press conference on Friday morning by saying: “He has been more efficient.

“He created more chances and has scored, especially, more goals. And I believe, in a guy like Ozil, you see 10 to 15 goals. I hope he does that before the end of the season.

“That’s always what you think he should get. He’s miles ahead on assists and provides the chances. The two combined, assists and goals, mean he deserves this award.”