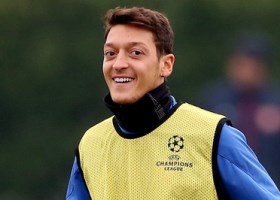 It has been reported that Arsenal midfielder Mesut Ozil is eagerly anticipating the Champions League Round of 16 after clash against German giants Bayern Munich.

The German international star, who was signed from Real Madrid in a £42.5 million deal, started off his career in Germany with Schalke 04 and Werder Bremen.

The 25 year old is clearly excited after the Champions League draw and tweeted the following: Alexis Sanchez Delighted To Have Settled At Arsenal