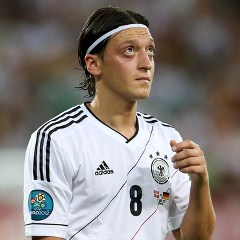 German international midfielder Mesut Ozil was impressed by England at the Euros.

The Real Madrid midfielder admits Germany would’ve faced a huge challenge of they had had to face England in the semifinals.

“As far as England are concerned, I think they’ve played a very good tournament,” he said.

“They were slightly inferior against Italy and I think that was visible during the game. But they, too, as a team definitely have improved and have developed further.”