It has been reported that Mesut Ozil has thanked Arsenal fans for their backing after victory at Aston Villa. 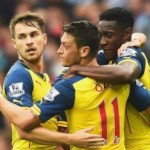 The German international playmaker has attracted criticism for his recent performances but at Aston Villa on Saturday he scored the opening goal before turning provider for Danny Welbeck’s first Arsenal goal in a 3-0 win.

“I’d like to praise the whole team, who really supported me, and especially the fans, who were very loud,” said Ozil.

“I want to thank the fans, who were really behind me and support the whole team so well.

“We knew exactly what strengths we would have. We analysed Aston Villa before the game and knew how they would play. Especially in the first half, we created some very clear opportunities. We didn’t waste our chances — we took them and that made the game easier for us.”