Reports are out claiming that Arsenal midfielder Mathieu Flamini says Mesut Ozil is as good as any player he’s played with. 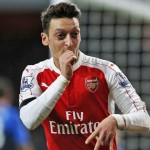 The German international has been in stunning form helping the Gunners to the top of the Premier League with three goals and 16 assists so far this season.

Flamini believes Ozil is right up there with former team-mates and Ballon d’Or winners Andriy Shevchenko, Ronaldinho and Kaka.

“I’m very pleased for him,” Flamini said. “We all knew he was a top player but I’m glad he’s proving it every game.

“It’s very important to have him on our side because, as you can all see, he can make the difference at any time.

“He has been giving so many assists and has been making so much difference in the past few games, so it’s a pleasure to play next to him and it’s also a pleasure to watch him on the pitch.

“His vision is something that you don’t find very often, so he’s easily one of the best players I’ve ever played with.”