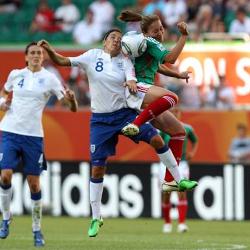 England were held to a disappointing draw by Mexico in their opening game of the Women’s World Cup at Wolfsburg’s Volkswagen Arena.

Fara Williams headed Hope Powell’s side in front midway through the first half, but a mistake by goalkeeper Karen Bardsley gifted Mexico an equaliser before the break as she failed to keep out Monica Ocampo’s long-range effort.

England are ranked 10th in the world, but travelled to Germany full of confidence after notable recent wins, including a victory over the United States in April.