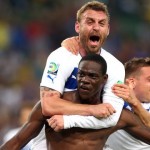 Mario Balotelli stole the show in Rio, as he crashed in a second-half winner to ensure Italy marked Andrea Pirlo’s 100th cap with victory at the Maracana.

The AC Milan striker fought his way into the penalty area and produced a fierce low shot to give the Azzurri their first win over Mexico since 1993 and, with it, the perfect start to their Confederations Cup campaign.
Pirlo himself had given Italy the lead midway through the first half with a trademark free-kick, only for Manchester United striker Javier Hernandez to bring Mexico level from the penalty spot.

Victory leaves Italy level on points with hosts Brazil at the top of Group A, with Japan next up on Wednesday. Mexico play Brazil on the same day.