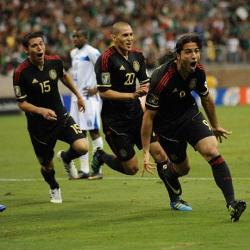 Extra-time goals from Aldo de Nigris and Javier Hernandez gave Mexico a 2-0 win over Honduras on Wednesday, earning them a place in the CONCACAF Gold Cup final against the United States.

In front of a loud and overwhelmingly Mexican crowd of more than 70,000, ‘El Tri’ were unable to put away their chances in the regulation 90 minutes but made amends during extra-time.

De Nigris produced a superb header to put Mexico ahead in the third minute of extra-time, rising to meet a corner from Pablo Barrera.

Manchester United forward Hernandez then pounced from close range after another De Nigris header from a corner was pushed out by Honduras keeper Noel Valladares.

The goal was the seventh in five games in the tournament for Hernandez, who is also known as “Chicharito”.

Honduras, who went close to winning the game in the latter stages of regulation, had Roger Espinoza sent off for a second yellow card with five minutes of extra-time remaining.

Saturday’s clash at the Rose Bowl in Pasadena will be the third consecutive Gold Cup final featuring the United States and Mexico.