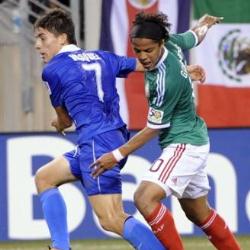 Javier Hernandez scored his sixth goal at the CONCACAF Gold Cup on Saturday as Mexico came from behind to beat Guatemala 2-1 in the quarter-finals.

The defending champions needed two second half goals to avoid a monumental upset after Guatemala skipper Carlos Ruiz had caught the Mexican defence napping to score in the fifth minute.

Substitute Aldo De Nigris put the Mexicans back on level terms when he scored after a goal-mouth scramble early in the second half before Manchester United striker Hernandez spared his team’s blushes with a back-heeled winner in the 66th minute.

Hernandez scored a hat-trick in Mexico’s opening game against El Salvador and two more in their second pool game against Cuba and is the leading scorer in the tournament, with twice as many goals as his closest pursuer.

Mexico, missing five players who were suspended for failing a doping test earlier in the tournament, will now play Honduras in the semi-finals in Houston on Wednesday.