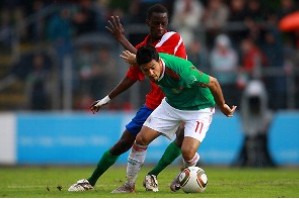 Mexico warmed up for the World Cup with a 5-1 victory over Gambia thanks to two goals apiece from Javier Hernandez and Adolfo Bautista.

Mexico will kick off the tournament on June 11 against hosts South Africa. The Mexicans dominated Gambia on a rainy day in southern Germany and looked sharp on the counterattack, but wasted a number of chances, too.

Hernandez, nicknamed Chicharito, gave Mexico a 1-0 halftime lead and doubled it five minutes into the second half. Bautista then scored his first, before Gambia earned their only goal through Ebrima Sohna’s header in the 65th after a corner.

Bautista connected at the far post to make it 4-1 and Alberto Medina slotted home from the left after a counterattack to complete the win in the 80th minute.