Reports are out claiming that Manchester City defender Micah Richards has revealed turning down Chelsea and Manchester United. 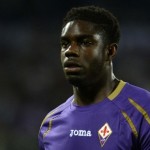 He told the Daily Telegraph: “I probably wouldn’t have left. I had a chance to go to Chelsea five years ago, and Manchester United, but I didn’t feel it was right. I always enjoyed City.

“They gave me a chance at such a young age [17]. I’ve been a bit unfortunate because, whenever I picked up some form, I got a niggling injury. With City, if you get an injury you can find yourself out of the team for months.

“If we didn’t get the investment we did, I’d probably be captain now.”