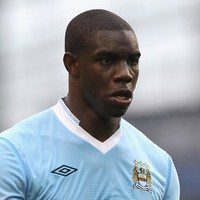 Micah Richards has admitted that he is happy to be playing for manager Roberto Mancini.

The Manchester City defender is back in the England squad this week.

The 23 year old told the Guardian : “When Mancini took over it was a hard place to be because with all the money the owners brought in you didn’t know whether you were going to be part of his plans,”.

“He’s improved my game a lot. He always tells me: ‘If you’re 100% you can be the best.’ When a manager’s telling you that, you believe him. He had all the money to spend and could have gone out and bought a right-back but he has me and Pablo Zabaleta – we share it out. He’s stuck with me.”